We work at the interface of engineering, physics and applied mathematics on topics broadly related to complex fluids and multiphase flows. Below are some themes that we are currently interested in. 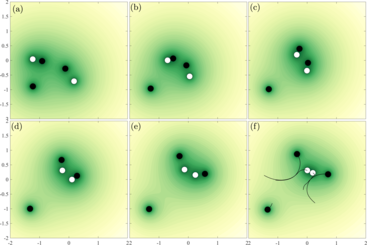 Swimming microorganisms such as bacteria interact through chemical and physical cues. Recently it has also become possible to develop catalytic motors that self-propel through chemical reactions. We develop mathematical models of self-propulsion at the microscale, and explore the role of chemical and hydrodynamic interactions in mediating collective behavior in many-swimmer systems.  We are also interested in understanding the role of inertia in populations of larger-scale swimmers. 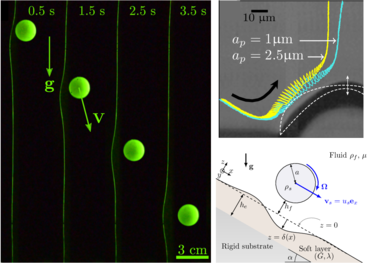 Interactions between fluids and soft surfaces are common in both engineered and natural systems, with examples including the flow of blood in capillaries and the design of artificial lubricated joints. We are interested broadly in problems involving fluid-structure interactions with particular emphasis on those occurring at small scales, where interesting and unexpected behavior often emerges. One example is that a suspended particle sedimenting near a flexible membrane or a fluid interface is repelled away from it. An active theme of research is to probe these interactions at much smaller scales and explore their use in passively separating flowing particulate suspensions. 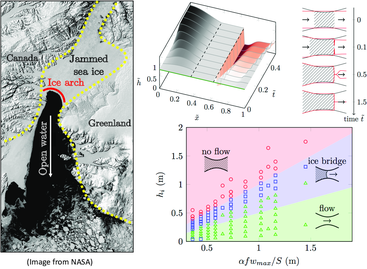 Sea ice forms from freezing ocean water and is transported by wind and ocean currents. Typically comprising interacting chunks of ice, the motion of sea ice exhibits features of flowing granular media. One such feature is the spontaneous jamming of sea ice as it flows through a narrow strait, resulting in the formation a rigid "ice bridge" that plays a key role in local climate and ecology. We are interested in continuum descriptions of this and other transport phenomena involving sea ice, which allow us to bring together ideas from hydrodynamics and complex fluids to address questions relevant to climate. We are currently seeking to better understand the links between the motion of sea ice and that of dense granular media using laboratory experiments. 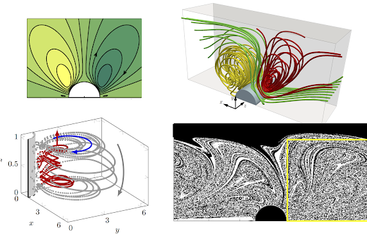 Bubbles are great at focusing acoustic energy. Microbubbles exposed to ultrasound at the right range of frequencies will oscillate and drive a rich variety of flows. These flows are powerful and can be used to manipulate particle suspensions, lyse vesicles and design micromixers. We work on modeling and experiments to understand the excitation and control of these flows, and to then quantify the transport of inertial particles suspended in the fluid. This ultimately lets us design applications at the microscale, including efficient micromixing and particle focusing devices.